Carbon Monoxide in Your Home: What You Don’t See or Smell Can Kill You! 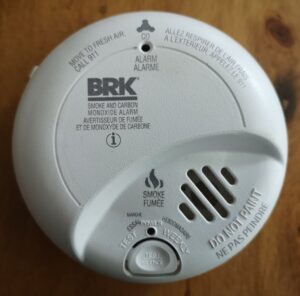 Today I had a distress call from one of my property management client’s tenants.

My client owns a home and rents out the apartments. The owners do not live in the area, so I’m here to help whenever they need me.

The home has an apartment in the basement and the rest of the house is rented out separately. The basement tenant called me at 9 am today, to say the carbon monoxide alarm woke her up and was going off in the house. Needless to say, I told her I would be right over.

When I got there, the door to the garage was open and the house was all closed up, so I went to find the tenant in the basement. She said the alarm had been going off for about 30 minutes. I knew, right away, that it wasn’t coming from the basement.

The main floor tenant wasn’t home, but instinct told me this was an emergency, so I entered the home and the smell just about knocked me over. The air was definitely not right, even though you can’t usually smell carbon monoxide in your home. All the lights were on and the furnace was off, but the house was really hot. A little dog was very busy barking at me and the cat just looks at me. Good thing. This meant they were still alive.

First, I checked the whole house to make sure no one was sleeping or unconscious. Since carbon monoxide, doesn’t have an odour itself, people can become ill without knowing it’s there. Thankfully, no one was home. I checked the furnace and the hot water heater. I didn’t touch anything, even a light switch, in case there was a gas leak which could lead to an explosion.

Don’t Touch Anything if There is a Possible Gas Leak!

When C02 detectors in your home, go off, don’t touch anything, since it could be signaling a gas leak. Turning on even a light switch, could ignite an explosion.

I did turn off the detector, which came back on a few minutes later. There was no smoke, so we called Enbridge, right away. They arrived about an hour later. The technician opened the door, took a reading, and emphatically told us to STAY OUT OF THE HOUSE! We left the doors open to air things out.

To make a long story a little shorter, after about two hours of airing out the house and taking more readings, the level finally went down to zero, were it was safe to go back in the home. It is a wonder that the little dog and cat weren’t affected. The Enbridge technician said the levels were high enough to kill a human. I was so glad the tenant called me when she did!

The Legal Apartment Was Super Helpful

It is a good thing that the tenant in the other apartment called me. We likely saved the animals lives. In this case, she wasn’t in danger because the apartment was a legal conforming apartment, according to today’s building code. It was completely sealed up apart from the rest of the house.

After all inspections by the gas technician and my heating contractor they found nothing wrong with the gas lines, furnace, or gas water heater in the house, which was puzzling. However, after speaking with the main floor tenant, I learned that a car had been running in the attached garage. As soon as they opened the door into the house, the wind sucked the CO right into the house, like a vacuum and set off the alarms. It filled the entire house including all the duct work.

The Moral of This Story is Two Fold

1. NEVER run your car in your attached garage. According to Enbridge Gas, this is a common cause of dangerous levels of carbon monoxide in your home.
2. ALWAYS make sure your smoke and CO2 alarms are working. Check them at least every six months or more often, is better. One way to remember is to check them when the clocks go forward and back.

Make Sure Your Home Has Enough Fire and C02 Alarms

It’s imperative that you have smoke alarms and carbon monoxide detectors in your home. I have one on every floor of my home, plus one in front of all the bedrooms. I also have two fire extinguishers, for different types of fires.

Do You Need Property Management Services?

I help landlords by finding and screening tenants, collecting rent, arranging property maintenance, checking in on the property, and more. If you’ve got rental properties, and don’t live nearby, or just plain don’t want the hassle, call me to find out how I can help you.